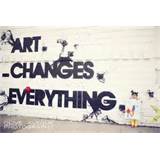 As a creative woman , who lived through the second wave of feminism, I have  been committed to feminist goals, ideas and issues throughout my life and within the art world, and I have long been aware of the sociological, political, institutional and cultural contexts , in which art is made and presented. I especially became more acutely aware of these in a profound way, after returning to University to complete my Bachelor of Fine Art Degree, having been out of school for thirty years. I was privileged to have had the experience of being taught wonderful art history and art seminar classes by Professors with a feminist and contemporary perspective. It was truly an eye opening and educational experience in every sense of the word. I came to discern how things have progressed for  female artists, but in some ways regressed.

That said, I was compelled to write this post after listening to a CBC Q debate, regarding the upcoming exhibition, by  the Museum of Modern Art, where numerous video games are to be displayed and considered as  art. The debate was about video games and whether they are art or not; between Guardian art critic, Johnathan Jones, who wrote the article, Sorry MoMA Video Games Are Not Art, and President  of Rhode Island School of Design , John Maeda .

I had to listen to the debate twice, because of my initial negative gut reaction toward  the aptly described, dismissive, Johnathan Jones. Upon listening a second time, I concluded, that he epitomized the historically perpetuated, misogynistic, narrow minded perspective, that negates the kind of open mindedness,  required to foster and nuture creativity, learning and imagination.
There was no mention of any women artists, to ever be included in so called, non-interactive art, and his pantheon of historic masters was overridden by his seemingly , man crush on Pollock and his ilk, of abstract expressionists that Johnathan Jones references, as if they were like demigods, remaining forever embedded, and entrenched within those "hallowed halls", never to be usurped, replaced or changed because they are some how unequal or unparallelled to those mentioned artists. As if to imply, this art was "real" art.
Art is life, art and life change, art changes everything and change is good!

I have always had the belief we are all born creative and as children, what we express is art, because is it is an expression of ourselves, and our imagination, and that's what art is, yes it can be about reality but mostly it's about our imagination and perception. Art critics do not and cannot dictate what art is or isn't, regardless of their high standard and opinion. I suggest that Mr. Jones take a lesson  from MoMA,  take a risk, start colouring outside the lines and give Journey, Flow, or Flower a try before dismissing them as being a "cheap standard"
Posted by Unknown at 10:00:00 PM